Nic’s Cradle Challenge is a bike ride in honour and memory of Nic Easton.

How do you encapsulate a life of 26 years that was lived to the max, in a brief bio like this? How do you paint a picture of the person living that life and convey their true personality to a reading audience? The task, realistically speaking, is next to impossible but we think it is worthwhile giving it a go and trying on this website to give you some idea of who Nic Easton was and why we think it is important to honour his memory through the Nic’s Cradle Challenge bike ride.

Nic, who’s full name was Nicholas Peter Easton, was born on 30th December 1987 in Devonport Tasmania to Jo and Ric Easton and was a welcome younger brother for seven year old James (Jo’s son from her previous marriage) and his 11month old sister Georgia.

Nic was pretty much of an all-rounder. He was artistic, musical, good at sport, an accomplished actor and film maker, a hit with the girls (especially his fiancé Jasmin), a true and loyal friend, a loving son and brother, funny, clever, quirky, responsible and caring. Nic discovered road cycling when he was studying Occupational Therapy at the University of South Australia. When Nic was diagnosed with leukaemia in 2013, at the age of 25, his determination and inner strength enabled him to courageously push through the toughest of times with a positive outlook. Nic highly valued the support of those around him and through open, transparent communication of his medical treatment, used the encouragement and support of others to maintain a fighting spirit during the most challenging of times. You can check out Nic's Twitter account where he tweeted during his treatment for Leukaemia.

Nic passed away on January 1st 2014 as a result of a lung infection.

Nic was a truly admirable human being who contributed greatly to the world in the short time he was with us and was someone who will be greatly missed by all who knew him and loved him.

We could go on and on about Nic but luckily for us, we have a range of videos of Nic, or created by Nic which tell the story much better than we could. 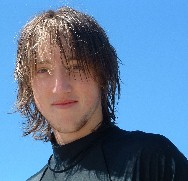